Sometimes it would be handy to have an autofocus assist light on the camera, but D2H doesn"t have one (there is one on the SB-600 I'm using but it isn"t always attached the camera). This idea has been on my mind for some time now and now I finally decided to do it.

Pinout for the 10-pin connector can be found here. 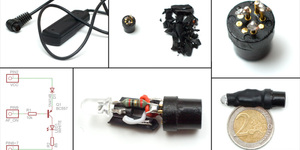 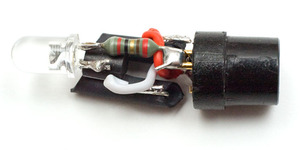 I had this one unused cable release lying around (haven"t been using it because of the bad connector, I have a better one that I'm using instead) and it was a good candidate for donating a connector. I cut the cover away and soldered all the parts together by "free forming". I then squeezed some hot glue between the parts and put some heat shrink tube over the whole thing to secure all the parts.

The circuit uses a normal PNP-transistor circuit to switch on the white led. The AF pin is normally high (+5V) and it connects to ground when the trigger is pushed half way down so that is why a PNP-transistor is used (current flows to the led when the base is low). I used the 1N4148 (D1 diode) to drop the voltage down a little bit (~0.7V) before the transistor because the voltage on the pin 2 is around 6V.

One thing I noticed tho is that the light stays on while the picture is taken and affects the light metering a bit. The next version I'm going to do will have a better connector and a push button to put the light on when needed (it will be in a quite good place and it's easy to operate with left hand's thumb).

Below is a short video of the light in action: 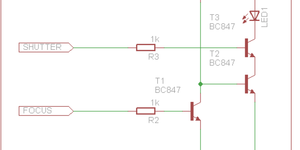