So I wanted a SC-28 cord for my camera and flash but didn"t want to pay that much for just two connectors and a cable so I decided to make it myself. Didn"t have anything important to do this weekend so here is the result. The flash shoe also has the locking hole for the flash so it stays very firmly in place.

First I started by cutting and shaping a piece of 1 mm thick aluminum to get a body for the flash shoe and after that I started building the connection part of it on a prototyping board (dot coppered). After all that was done I assembled them together and filled the hole thing with hot glue to give it some strength (I could have used epoxy for better strenght but didn"t have any at hand). The tripod mount is done from a 4 mm thick piece of aluminum and then drilled and threaded.

Camera side of the thing is done from various pieces of plastic superclued together. I got the springs and studs from a flash shoe adapter (one flash, many changeable mounts). I could have used that to make this but it was a bit too tricky to modify and I didn"t have one with a ready Nikon mount.

The connectors are PS/2 connectors (or mini-din, used in keyboards etc). I left the cables that short because I can use a normal PS/2 extension cable with this. Cost for this project was 0€ (all the material I used were found by looking around the apartment) so now I can use the saved money to something else useful.

Tools used: A drill press (a normal drill would have been suitable), a hacksaw, small knife, set of files, few pliers, two clamps (to press things together when applying glue), soldering iron.

Edit, 16-Dec-2007: I found my 3-meter PS/2 extension cord and it works perfectly with this. I also did some small modifications to the hot shoe by putting a small amount of solder to each of the pins to make them a bit higher and it now works much better because all the pins on the flash now get a better connection.

Featured in Strobist on December 10, 2007:
» Straddling the Line Between Genius and Insanity, Part Deux 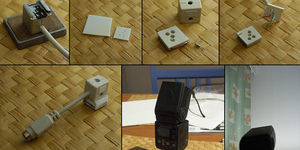