I've wanted to build a robot hand for a long time now and finally I've found a place to get cheap servo motors; DealExtreme. I made some planning with Google SketchUp and came up with this: 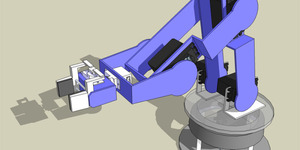 There will be five normal sized servo motors and two mini servos. The fifth normal servo is under the translucent round piece for sideways rotation. There are two servos for the first joint because the biggest amount of torque is needed at that point. Maybe I'll find a high-torque servo for that later, dunno, I only have normal ones at hand at the moment.

Here is a video of the SketchUp model that I spiced up with SketchyPhysics 2 -plugin so I could control all parts of the arm: